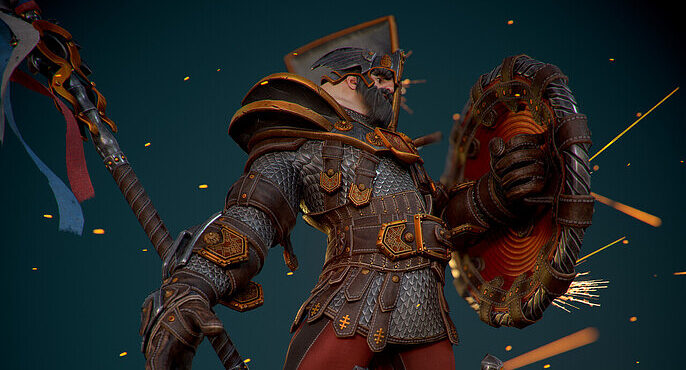 EGGO currently works Game Forest as the Head of Art but dapples in freelance work with characters and 3D concepts from time to time. He enjoys participating in challenges such as Cubebrush’s Art War in his spare time.

This year's battle deeply belongs to Russian culture. His character is superhuman-  Ivan the Giant, also called Fabulous Protector of Motherland. Here he walks us through his process.

As usual, everything starts from references and brainstorm to get an overall idea of the character.

After research, I decided that my character will be a giant which inspired his body proportions.

The next step was to concept his overall design. I made a bunch of variants and chose the last one for finalizing.

I wanted to make some really exaggerated elements for this character so he should look more like a comics hero but with Russian and Slavic twists. Here’s the first block out of it:

Since the whole creation process was dynamic, I changed a lot on the go– adding and removing some parts until I was satisfied with the overall silhouette and proportions.

Later I removed some things, like the hanging strips of fabric from his hands. My first step was to make and detail his chain mail with Zbrush like a MicroPoly (such a great helper!).

To get all the armor plates moving in the right direction, I basically used MicroPoly's AlignEdges and a little tweak to orient properly each individual piece with SpinEdges Zmodeler.

Ivan begins to grow with details, stitches, and some additional design choices. I’ve modeled a two-headed eagle - it's one of the main symbols of Russia and especially Moscow.

There were two very similar proportions parts on the character: The eagle holder and badge on his belt. So to divide it visually a bit I've added a small separation part for a viewer's eyes on Ivan’s belt.

My next step was to add some details to the armor such as scratches and other imperfections.

With the next step, I began to think over additional items of equipment that would be useful for my character. For example, a horn with which he calls for help or notifies of an incoming enemy that is always with him, hanging on his belt.

So many elements in Slavic culture are associated with the Scandinavian northern gods so I decided to add a decorative and practical elements such as wings to his helmet. I also wanted to decorate his bigger one shoulder pad with iconic Russian history quotes from the "Tale of Bygone Years" (In Russian: "Повести временных лет") - the earliest Russian chronicles. Here’s a translation of the text on shoulder pads for those who are interested:

1. "But if ye dwell in envy and dissension, quarreling with one another, then ye will perish yourselves and bring to ruin the land of your ancestors, which they won at the price of great effort"

2. "Among all the nations, there are some that possess a written law, while others simply observe certain fixed customs, for, among those devoid of law, their ancestral usage is accepted in its stead"

The next step was to create details for the character's head. I used some textures and grabbed details from a free HD scan. I’ve also sculpted Ivan’s beard and brows with Zbrush and haircard brush specially for this challenge.

As a weapon, I chose a lance and a shield to defend against an attack. Where the shoulder pads cannot help Ivan, the shield will come to the help. Kind of Captain America twist… 😉

The next one step is to make a lowpoly and UVs to bake all details and begin to texture it. For lowpoly I used Topogun and for UVs – Cinema4D and RizomUV. 23.jpg

I didn't limit myself to a number of maps through the challenge because there were not any restrictions. After seeking colors and combinations I’ve ended up with a classical color scheme for Russian fairy tale knights aka bogatyr or vityaz. All textures were made with Substance Painter through a lot of UDIMs.

One of the last steps to do is to find a pose for the character. It should suit my needs to show my character in all its glory! So, I’ve made a simple and fast one rig.

All the final images, materials, and effects I’ve made with Marmoset Toolbag. It was important for me to show Ivan not as an aggressor, but as a true defender. In the final composition, he is defending himself and all who stand behind him so even the pike is not in his hands, but stuck in the ground. He is like a symbol-reminder of the text on his shoulder pads.

So that's it! It's done. Here's some final shots:

Thanks to all people who supported, commented, and watched all my WIP struggle for this ArtWar! Thanks, Cubebrush for a nice contest and opportunity to make this making-of! And additional thanks to all who read this article to the end and hope you’ve found some useful and interesting stuff here.